It’s four days until the biggest race of the year, the 98th Hakone Ekiden on Jan. 2 and 3. 21 university men’s teams race 10 legs from central Tokyo to the mountains and back over the course of two days, each leg roughly a half marathon in distance and the total course adding up to 217.1 km. 65 million people watched at least part of the 2021 NTV Hakone broadcast broadcast, so you know they must be on to something. The broadcast, the best in the world, starts at 7:00 a.m. both days, and as you’d expect they keep it a locked-down secret only for Japanese audiences. A VPN or mov3.co are probably the best bets for trying to watch from abroad, but JRN will once again cover it all on @JRNLive.
The 2021 race had one of the most dramatic finishes in Hakone history, with Komazawa University anchor Takuma Ishikawa coming from over a kilometer behind to run down Yuki Onodera with 2 km to go and stop him from bringing Soka University home to its first-ever Hakone win. Both were 3rd-years, and it’s one sad detail of the 2022 race that neither will be back for a senior year rematch, Ishikawa having been arrested a few months after the race and no longer running for Komazawa, and Onodera missing from Soka’s entry list.
The pandemic has had a major impact on Hakone and the collegiate men’s development system. Given the average stage length of 21.71 km, the half marathon has long been the major focus of Japanese collegiate training, something that has contributed directly to the depth of the country’s marathoning and results like what we saw in Lake Biwa this year. During the pandemic most of the major races on the collegiate half marathon circuit haven’t happened, and that’s led to a refocusing on track racing. It’s easy to see that in this year’s Hakone entry lists.

At any rate, the shift that has happened makes the job of ranking teams harder. Defending champ Komazawa has the best 5000 m and 10000 m 10-man averages, 13:41.71 and 28:24.64, but almost nobody on the team has run a serious half marathon. 2nd-tier teams that had to run October’s Yosenkai qualifier half marathon have quality half marathon times on the books and look better on paper relative to top-tier teams like Komazawa than they probably really are. Other teams like last year’s 3rd-placer Toyo University publicized that they were doing a half marathon time trial in place of November’s Ageo City Half Marathon but didn’t publicize the results, leaving them way farther down the rankings than they should be. We’ve tweaked our rankings formula to try to account for all this, but as with last year you can be sure that there’s more unpredictability than usual.

Aoyama Gakuin University has won Hakone 5 of the last 7 years and is the favorite. 2nd at both the Izumo Ekiden and National University Ekiden this season, AGU is one of only 3 teams in the field to be better over 5000 m, 10000 m and half marathon than it was last year, when it was 4th at Hakone, and one of only two with sub-14, sub-29 and sub-63 10-man averages. Two weeks after the National University Ekiden it had 6 people total under 63 minutes in two half marathons, so whatever it lacked at the shorter ekidens you can be sure AGU’s head coach Susumu Hara isn’t letting the team’s stamina slide.

AGU’s two strongest competitors on paper are this year’s and last year’s Yosenkai qualifier winners Meiji University and Juntendo University. But it’s one thing to win the qualifier, making you the #11 team in the Hakone field, and something else to go for the overall win. Meiji has a history of not performing well at Hakone, and last year Juntendo struggled in part because star 1st-year Ryuji Miura had suffered an injury while training for the National Championships 3000 mSC a month before Hakone. Running up to potential would put either into contention, but as Soka head coach Kazutaka Enoki said right after last year’s loss, “It’s not that easy.”

Komazawa, Tokyo Kokusai University and Toyo could all be up at this level despite being ranked further down the field due to their lack of experience with the half marathon. Komazawa’s trending in that direction after finishing 5th at Izumo and then winning the longer Nationals, while TKU and Toyo are the opposite, TKU winning Izumo and taking 5th at Nationals, and Toyo going 3rd and 10th. The most likely scenario for TKU is to stack the first three stages with its top 3 Vincent Yegon, Masaya Yamatani and Ken Tansho to build up a big Day One lead and then try to hang on through Day Two like Soka attempted last year. That would set up a potential duel between Yegon and Komazawa’s Ren Tazawa, maybe with Miura, the 3000 mSC NR holder, 7th in the steeple final at the Tokyo Olympics, and the U20 half marathon NR holder, in the mix. Given that Tazawa beat 2021 Hakone MVP Yegon over 10000 m earlier this month, it would be one of the highlights of this year’s race.

With all those teams capable of finishing in the top 6, the race to get into the top 10 and score a guaranteed place at the 2023 Hakone and a trip to the 2022 Izumo Ekiden will be a tough one. 2nd at the Yosenkai qualifier the last two years, Chuo University isn’t far off the top tier but couldn’t translate that to success last year. The Kanto Region Student Alliance team, made up of top-placing individuals at the Yosenkai from teams that don’t qualify and which doesn’t count in team scoring, and Waseda Universtiy, featuring sub-28 trio Yuhi Nakaya, Naoki Ota and Ryuto Igawa, are another step behind Chuo. 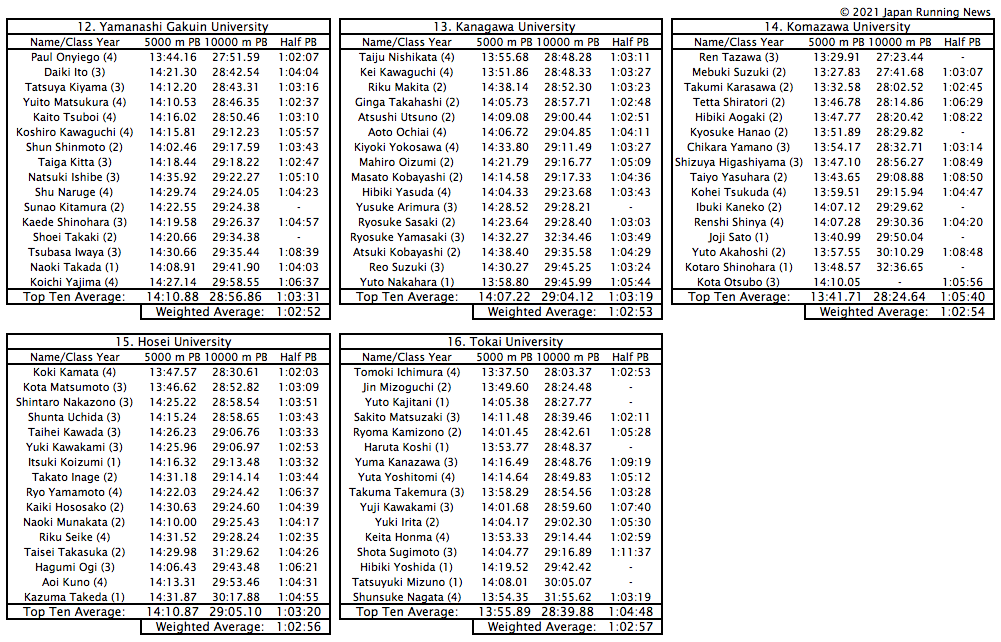 Excluding Komazawa there’s not much difference between the next 9 teams after Waseda, taking the list of solid contenders for top 10 to 17. Given its performance last year Soka is the best bet to finish higher than expected. 2019 Hakone winner Tokai University seems strangely down on its luck this year, finishing 9th at Izumo and 12th at Nationals, and missing last year’s Third Stage winner Shotaro Ishikawa from its entry roster. As above, TKU and Toyo should place higher than their ranking would suggest but are unpredictable due to their lack of available half marathon times. Toyo will have former H.S. 5000 m NR holder Kosuke Ishida making his Hakone debut, one of the other highlights to watch for. Teikyo University is in the same situation as TKU and Toyo, and given a stable history at Hakone it should probably be included among the contenders for top 10. That leaves only the debuting Surugadai University and bottom-ranked Senshu University on the list of non-contenders, making for what could be one of the most competitive Hakones in memory.

One of the things that NTV does so well on its broadcast, especially on Day Two, is to cover multiple plot lines. With so many good teams this year there should be a lot of turnover around the dividing line between 10th and 11th keeping their production crew busy. Things can get complicated if the leading team gets too far ahead, so in prep for the race take a few minutes to read this guide to understanding elements of the ekiden format like white sash starts and race strategy. See you at 7:00 a.m. Sunday morning.