Onions Put to the Test for Weight Loss, Cholesterol, and PCOS Treatment 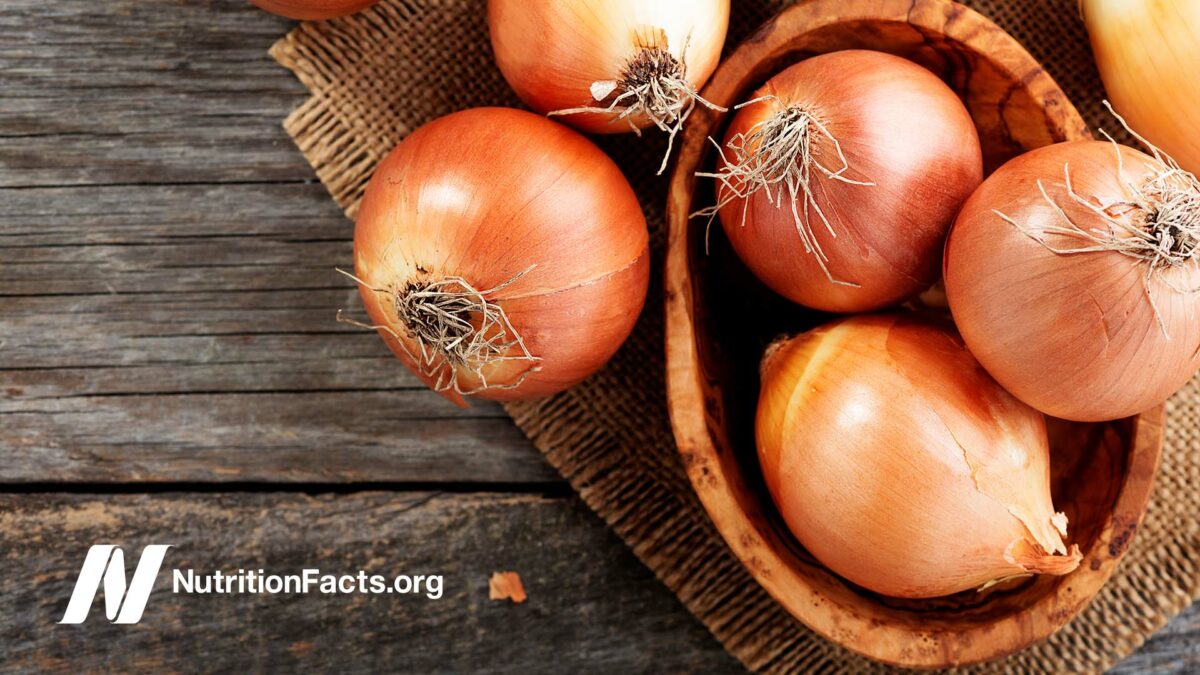 Below is an approximation of this video’s audio content. To see any graphs, charts, graphics, images, and quotes to which Dr. Greger may be referring, watch the above video.

In my last video on onions, I talked about the data supporting—or not supporting—the role of onions in boosting testosterone in men, protecting bone health, controlling allergies, and dealing with chemo side effects. What about weight loss? Enter the effect of steamed onion consumption on body fat in overweight subjects. The researchers used steamed onions so they could better disguise it against placebo, and dried it into onion powder and gave people just a miniscule amount—about an eighth of a teaspoon a day. Surely, a little daily dusting of onion powder isn’t going to affect the course of people’s weight, but check out these results, reported in the abstract: a significant reduction in body fat mass on both DEXA scan and measured by CT scan, a significant decrease in the areas of whole fat, visceral fat, and subcutaneous fat.

Hold on. If a little onion powder is so effective for weight loss, why wasn’t it featured in my book How Not to Diet? Because as so often happens in studies, the spin in the abstract doesn’t accurately represent the actual data. Here’s the DEXA scan results. No significant change of fat in the group that got the placebo capsules. They only appeared to lose about a spoonful of fat, whereas the group unknowingly taking an eighth of a teaspoon of onion powder stuffed into capsules lost nearly one and a half pounds of body fat, a significant drop from baseline, but not a statistically significant drop compared to the placebo group, meaning the loss could very well have just been due to chance. Same thing with the CT scan results: five times more loss of overall fat, and 30 times more loss of the dangerous visceral fat, but did not reach statistical significance compared to placebo.

A more recent study tried four teaspoons of onion powder a day, and similarly failed to accelerate the loss of body fat compared to placebo––but the placebo was also four teaspoons of onion powder a day. They used yellow onions versus white onions, and it seems they both may have caused a loss of body fat, without a significant difference between them. Either way, you can look at these two studies and say, yeah, but what are the downsides? I mean just an eighth teaspoon of onion powder a day. Why not give it a try? Can’t hurt, but we just don’t have confidence that it’s going to actually help.

Turning now to polycystic ovary syndrome, also known as P.C.O.S., or PCOS. It’s one of the most common hormone disorders, affecting 5 to 10 percent of reproductive-aged women. In addition to symptoms like irregular periods, PCOS is also a pre-diabetic state, with decreased insulin sensitivity. PCOS treatment is a big challenge due to medication side effects. Therefore, what about using dietary options? How about a randomized controlled clinical trial of raw red onion intake?

Why onions? Well, onion extracts evidently help in diabetic rats and, more importantly, in diabetic humans, but evidently not in non-diabetic humans. PCOS sufferers are kind of pre-diabetic; so, would it work for them? First, let’s look at those other two studies. Here’s the diabetic one, on the metabolic effects of onion and green beans. Diabetics spent a week eating either a small onion a day, or the same diet but instead with about five cups of green beans instead, and they both worked. The onion dropped people’s blood sugars by about 10 percent, and the green beans more like 15 percent.

Here’s the study that supposedly shows no blood sugar benefits for nondiabetics. It’s true onions don’t lower normal blood sugars, which is a good thing, but check out what happens when you feed people sugar. Have people down about two tablespoons of corn syrup, and their blood sugars shoot up over the next two hours before their body is able to tamp it back down. But give people the exact same amount of sugar, but with more and more onion, and the blood sugar spike is significantly dampened––almost as much as if you had instead given them an antidiabetic drug. And we see the same when you give people a shot of adrenaline, with…or without…onions. So, are there blood sugar benefits for both diabetics and nondiabetics alike? No difference was found between the higher and lower onion groups of PCOS patients. Nor were there any differences in a marker of inflammation between the two groups. But women with PCOS aren’t just at higher risk for diabetes and inflammation, but also high cholesterol.

Women with PCOS are seven times more likely to have a heart attack, the number one killer of women. But raw red onion consumption appears to be effective as a cholesterol-lowering food, though the high-onion group only dropped their LDL cholesterol about five points––not significantly different than the low onion group.

I did find this study from nearly 50 years ago where researchers fed people nearly an entire stick of butter, and their cholesterol shot up about 30 points within hours of consumption, but only nine points or three points when combined with about a third cup of raw or boiled onion––the moral of the story being…don’t eat a stick of butter.

Please consider volunteering to help out on the site.

Inclusive fitness resources for all body sizes and abilities